SACRAMENTO – Today, California Republican Party Chairwoman Jessica Millan Patterson released the following statement on the CAGOP delegates’ decision not to endorse a candidate in the recall election of Gavin Newsom:

“Today’s overwhelming decision by our delegates to offer no endorsement speaks to the strength of our field of candidates and the outstanding position our party is in going into the recall election. We are squarely focused on putting California back on track by recalling the worst governor in California history. Gavin Newsom is arrogant, incompetent and a desperate politician who has failed Californians in every way possible. The state is burning, crime is spiking, homelessness is rampant, students have fallen behind, and taxes are suffocating working people. On September 14th, voters will end the Newsom nightmare once and for all and finally restore good governing to California.”

The CAGOP delegates’ decision occurred at a virtual endorsement meeting this morning. The four candidates who had qualified to be considered for the CAGOP’s endorsement were: Larry Elder, Kevin Faulconer, Kevin Kiley and Doug Ose. At the meeting, RNC National Committeewoman Harmeet Dhillon and RNC National Committeeman Shawn Steel put forward a motion to table the agenda item to vote on an endorsement so no endorsement would be issued in the recall race. The delegates passed this motion with nearly 90 percent support. The meeting was then adjourned.

Four Republican gubernatorial candidates have qualified for consideration at the August 7 endorsement meeting of the California Republican Party.  Former Mayor Kevin Faulconer, radio talk show host Larry Elder, Assemblyman Kevin Kiley and former Congressman Doug Ose were each nominated by the required 200 delegates and will appear on the first ballot at the meeting.

According to the bylaw adopted by the CAGOP executive committee, if no candidate receives 60% of the delegate votes, the candidate with the least number of votes will be dropped and another vote will be taken.  That process will be continued until there are two candidates remaining.  At that time, delegates will choose between the final two candidates and an option for “no endorsement.”  To be endorsed, a candidate must receive 60% support of the delegates present and voting.

The meeting will be conducted virtually and delegates must register and pay a registration fee in order to participate.  Delegates who are unable to attend may assign their vote to another delegate or alternate delegate using the approved CAGOP proxy form available on the CAGOP website.  Original signed forms must be received at the Sacramento CAGOP headquarters by noon on Friday August 6 in order to be valid.  No fax, scanned or electronic copies of signed forms are permitted.

The recall election is scheduled for September 14 and mail ballots will sent to all active registered California voters beginning August 16.  Voters will cast two votes – 1) a yes or no vote on whether the Governor should be recalled and 2) a vote for the candidate to replace Newsom should he be recalled.  46 candidates will appear on the recall ballot:  24 Republicans, 9 Democrats, 10 NPP’s, 2 Greens and 1 Libertarian.  Mail ballots must be returned or postmarked by September 14 in order to be counted in the election. 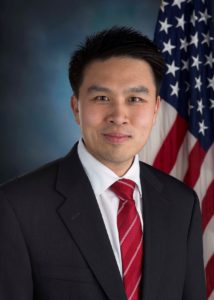 Public policy adviser and Stanford educator Lanhee Chen, who has advised presidential campaigns, is running for California state controller.  He explains, “We need a check on the Sacramento politicians who spend first and ask questions later. And as taxpayers, we deserve to know exactly how our money is being spent. I will fight for you and make sure your tax dollars aren’t being wasted.”

Lanhee Chen has taught public policy, researched public issues to address societal problems, advised candidates and public officials, and provided commentary in the national media.  He is a research fellow at the Hoover Institution, a teacher and director in the Public Policy Program at Stanford, and an affiliate of the Freeman-Spogli Institute for International Studies.

The state Controller position is open in the next election, as incumbent Betty Yee has reached her term limit.  In addition to controlling disbursement of state funds and informing the public about the state’s financial condition, a key function of the controller is to audit various state and local government programs.  An active controller can uncover waste and abuse.

Chen served on the independent Social Security Advisory Board, which advises the President and Congress on Social Security issues.  He also serves his community as the current Chair of the Board of El Camino Health, which runs two local hospitals.

He worked briefly as an attorney at international law firm Gibson, Dunn & Crutcher, followed by positions as a policy advisor or director in several campaigns and think tanks.  He has also been a writer and political commentator for various national media organizations.

On his website, he says about state controller, “With my experience in policymaking, and a strong belief in the values of fiscal responsibility, transparency, and independence, it’s a job I know I can do well.”

Lanhee Chen lives in the South Bay with his wife Cynthia, a nonprofit attorney, and their two kids.  You can learn more on his campaign website, www.ChenforCalifornia.com.

Lanhee will be the featured speaker at the SVGOP-SPARC Picnic on August 22nd in Cupertino.