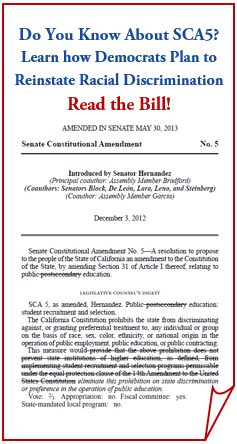 SCA 5 would allow the State of California to deny an individual or group’s rights to public education on the basis of race, sex, color, ethnicity, or national origin.  Click on the image to the right and Read the Bill!

Edward Hernandez has been trying to revise Prop. 209 since he was a member of the State Assembly.  He introduced Assembly Bill 2047 in 2010 to enable discrimination in our post-secondary schools. Democrats completely backed him and Republicans opposed. View the party-line votes. Thankfully, Governor Schwarzenegger vetoed it. As a Senator, in 2011, Hernandez introduced a similar measure (SB 185) that passed out of the Senate on a Party-Line vote with Democrats supporting and Republicans opposing admittance to college based on race rather than merit.  This Constitutional Amendment (SCA 5) not only would have enabled discrimination in our colleges, but at ALL levels of education. The bill was ultimately vetoed by Governor Brown, not because he opposed the concept, but because the issue was under consideration in the courts. Brown’s veto message below states that he believes the change needed to be made to the constitution.  That is why the Democrats are back this year with a constitutional amendment. View the Governor’s veto message below to learn how he regards this issue of overturning portions of Prop. 209.

Brown said he believes the April 22 ruling on the Michigan case by the nation’s highest court “shut the door” on any kind of new or expanded racial preferences — unless those rules are enacted by voters.

“It’s not at all clear that if you put it on the ballot, that it could be passed,” he said in the KQED interview.

Brown has long defended affirmative action policies, including during his time as attorney general.

“I do think that because of where we are in the gaps between the races, I think we need some degree of affirmative action,” he said. The governor acknowledged the deep divisions that surfaced during the brief legislative debate over a proposed constitutional amendment to reinstate affirmative action in higher education and contracting in California. But he characterized any effort to bridge that gap as “chancy.” Read more…

Citing use of scare tactics and misinformation by opponents of SCA 5, Senate pro Tem Darrell Steinberg and Assembly Speaker John Perez announced the formation of a joint Senate and Assembly Commission tasked with holding hearings up and down the state to solicit expert testimony, as well as public input, concerning SCA 5 and equal opportunity in California’s public institutions of higher learning.  We will list Bay Area meetings of the Commission in the Calendar of Events.

LA Times Article: Democrats Turn on Democrats Who Now Oppose SCA 5 — After They Voted For It
Sac Bee Capitol Alert: As Dems continue to turn on their colleagues, this article proves this issue will resurface in the Democrat controlled legislature
Washington Examiner Article:  Asian-Americans in California Send a Message: Race and Gender Preferences Are Obsolete 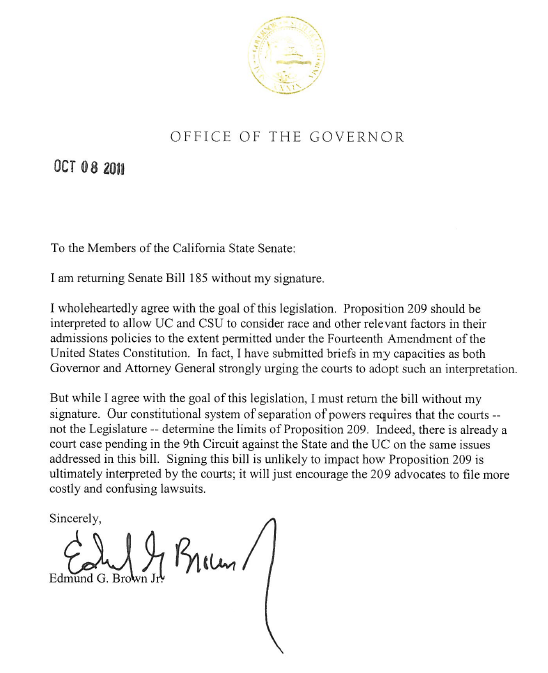 Democrats Regroup and Pull SCA 5 from the Assembly

Expressing concerns they didn’t have the votes to move forward, SCA5 was returned to the Senate.  If the Democrats in the Assembly had followed the lead of their colleagues in the Senate, SCA 5 would have been an initiative on the 2014 November Ballot.  If voters approved the measure, all references to public education would be removed from Proposition 209, impacting students who were expecting to enter college based on merit.  Always a target for repeal by Democrats in the Legislature, 209 amended the state constitution to prohibit state government institutions from considering race, sex or ethnicity in the areas of public employment, public contracting or public education.

“Today Speaker Perez sent SCA 5 back to the Senate without taking the matter up in the Assembly.  While this is a temporary victory for the many families and students who have rallied against this attempt to re-introduce institutionalized discrimination in our public schools, we must remain vigilant.”

“Senate President pro Tem Steinberg restated in his release that he still supports SCA 5, but wants a “calm and intelligent discussion about what Affirmative Action is and is not.”’

“The people pushing SCA 5 repeatedly try to change the discussion with misinformation, saying that people don’t understand the issue. The opposite is true. There has been an outcry across the state, because people do understand the issue. As summarized by the non-partisan Legislative Counsel regarding SCA 5, “The California Constitution prohibits the state from discriminating against, or granting preferential treatment to, any individual or group on the basis of race, sex, color, ethnicity, or national origin in the operation of public employment, public education, or public contracting. This measure would eliminate this prohibition on state discrimination or preference in the operation of public education.” SCA 5 will allow once again institutionalized discrimination in our public schools.”

“Using their super-majority, Democrats passed SCA 5 out of the Senate on January 30th to the Assembly on a party-line vote. Republicans will continue to oppose this measure in any way, shape or form.”

Keep up with others who are concerned about this proposal on Facebook.

Read what Ward Connerly has to say on the importance of preserving Prop. 209, a measure he was instrumental in passing.

Comments by Peter Kuo, Candidate for Senate District 10.  “SCA 5 is Alive and Well- Just Hiding until after November”.

Janet Nguyen weighs in on the future of SCA 5 and more effective ways to address racial inequities.

It’s up to the Assembly to Stop SCA 5

Sign this Petition to express your concerns to State Assembly Members.