Patterson, who won on the first ballot with a 24 percentage point margin over the next place finisher,  served as CEO of California Trailblazers which has trained many of our Bay Area state legislative candidates.  She was endorsed by Bay Area County Chairs, Hugh Bussell from Alameda County, Shane Connolly from Santa Clara County, Neal Kaufman from San Mateo County and Jason Clark from San Francisco.

Small business owner and entrepreneur Peter Kuo was elected State Vice Chair. He was the Republican nominee for State Senate District 10, including Fremont, Milpitas and Santa Clara, in 2014 and became a leader in the effort to rally Asian voters in opposition to SCA 5 which would have reintroduced racial preferences into college admissions.   In the only race that required two ballots, Peter ultimately prevailed with 57% of the vote.

In the closest race of the day, Greg Gandrud, owner of Gandrud Financial and former Central Coast Regional Vice Chair, won the race for Treasurer by just 2 votes out of 1188 votes cast.

Randy Berholtz, a corporate lawyer and pharmaceutical industry investor, won the race for Secretary with 78% of the vote.

Jessica Patterson immediately reached out to her two opponents and asked them to co-chair the party’s voter registration task force.  Both candidates had campaigned strongly on reinstituting a statewide voter registration program at the California Republican Party. 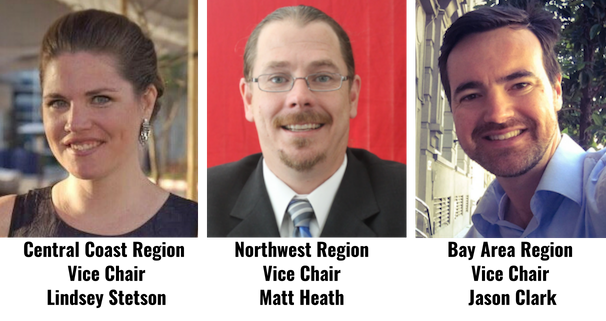 Lindsey Stetson, Matt Heath, and Jason Clark were elected regional vice chairs for the three regions covered by BayAreaGOP.  The elections took place in the regional caucuses at the California Republican Party convention on Saturday, February 23.  The regional vice chair represents the region on the California Republican Party Board of Directors and provides leadership and support to the region’s Republican county committees.
Lindsey Stetson won a comfortable victory over her opponent in the Central Coast region, which includes Monterey, Santa Cruz, San Benito, and coastal counties down to Ventura.  Lindsey, a 5th generation Republican woman, has served as executive director for the Republican Party in both Santa Barbara and Monterey counties.  She has been active with various Republican volunteer organizations and currently serves on the CAGOP Volunteer Organizations Committee.  Lindsey works as a professional fundraiser focused on event fundraising and planning and lives in Ventura.
Matt Heath was elected unopposed in the North West region, which includes Napa, Sonoma, Solano, and several other counties north to the Oregon border.  Matt has served in several positions in the Sonoma County Republican Party, including chairman.  He has also served as a school board trustee, a state Assembly nominee twice, a member of the CAGOP Initiatives Committee, and state chairman of the Republican Liberty Caucus of California.  He has operated a small business and currently works at a local charter school.
Jason Clark was unopposed in the Bay Area region, which includes Alameda, Contra Costa, Marin, San Francisco, San Mateo, and Santa Clara counties.  Jason is chairman of the San Francisco Republican Party, an experienced Republican volunteer group leader, a recent Cox for Governor coordinator, and a frequent Republican media spokesperson.  He works as an attorney and project manager assisting clients in managing their electronic information for litigation.  He was featured in a BayAreaGOP article last month.
MENU