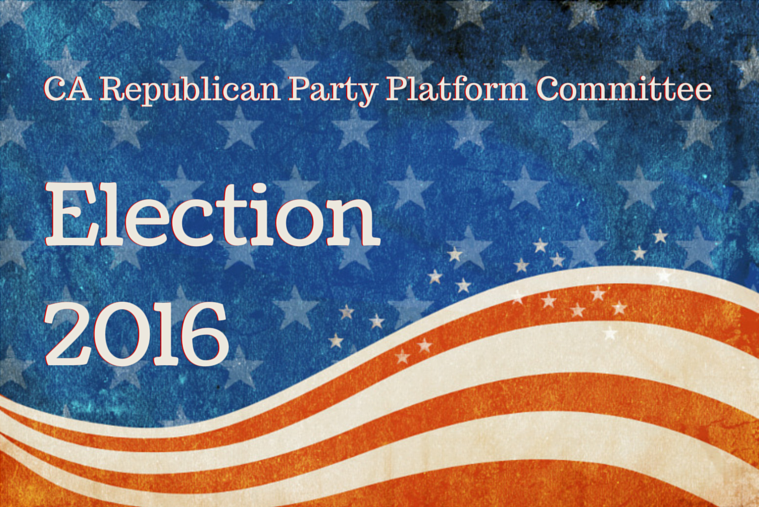 The California Republican Platform is created to outline the Party’s guiding principles.

Prior to the Presidential Election Year, the California Republican Party elects a new Platform Committee. Committee members from each Assembly District are elected by State Delegates. Other committee members include County Committee Chairs, nominees, elected office holders, regional chairs and officers of the State Party.

View the list of Platform Committee members from the Bay Area in the column on the right.

The Platform Drafting Committee has been appointed and Bay Area-based members are identified on the list to the right with an *.  This Committee will meet Saturday, August 1 at a location near LAX to draft a platform that shall be presented to the full Committee no later than August 10, 2015.  California Republican Party Chairman Jim Brulte recently announced that Delegates may attend this meeting, even if they are not on the Drafting Committee. Those wishing to attend should RSVP by emailing CRP Membership Director, Katie Wheeler, no later than Monday, July 20, 2015. More details about the meeting, including the confirmed location, will be in upcoming Delegate newsletters.

The platform will be presented to CRP Delegates at the Fall Convention to take place September 18-20 in Anaheim.  If you are a Delegate for the California Republican Party, you may log in to the Delegate’s page on the CAGOP website to learn more about the work of the Platform Committee.

Listed in Order by Assembly District