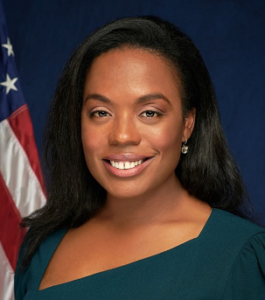 Air Force veteran Tamika Hamilton, a mother of four, was the leading Republican candidate in the primary election for California’s 3rd Congressional District and now takes on the incumbent Democrat.

In her candidate statement, Hamilton described her plans for her district, which is largely agricultural, “I will fight back against failed water policies and regulations that force our farmers to spend money replacing perfectly good equipment. I will fight to give our veterans the resources they need now! Most importantly, I will fight to curb the flow of drugs into our communities that is fueling the homelessness crisis.”

Tamika and her husband, Ray Hamilton, are active in their church and also volunteer with local community groups.  Tamika’s experience with a homeless ministry, particularly homeless veterans, motivated her to run for Congress.

Raised in a family that encouraged public service, Tamika Hamilton served on active duty in the United States Air Force for fourteen years.  She was twice deployed to the Middle East as part of Operation Enduring Freedom.  She earned the Air Force Achievement Medal, Air Force Good Conduct Medal, and Joint Service Commendation Medal, the latter for work with the U.S. Army.  In addition, she and her unit members received the Air Force Meritorious Unit Award, which recognizes outstanding achievement or service in direct support of combat operations.

The 3rd Congressional District includes eight counties and runs from Fairfield in the south nearly to Chico.  (See the map.)

Tamika Hamilton was born in Calvert County, Maryland, near the western shore of the Chesapeake Bay, and raised by her grandparents.  Her grandparents were both Vietnam veterans and farmers. Her grandfather, who received a Purple Heart during the Vietnam War, encouraged her to serve in the military.  Soon after graduating from high school she arrived at Lackland Air Force Base, Texas for basic training in the U.S. Air Force.

During her time in the air force, Tamika has taken courses and earned her Associate degree from the Community College of the Air Force.  When she has free time, she enjoys hanging out with her kids or doing interior design, an interest she has sometimes applied to decorating housing for low-income people.

Tamika’s husband Ray is a Navy veteran who now works as a local police officer.  Tamika and Ray have four children and live in Dixon. You can learn more about Tamika Hamilton in her video, on her campaign website, www.votetamika.com, on Facebook, on Twitter, or on Instagram.

On March 20, 2020, the Governor announced that all deadlines associated with completing, auditing, and reporting on the official canvass of the March 3, 2020 Presidential Primary Election are extended by 21 days.  He also announced that the May 12th special elections for Congressional District 25 and Senate District 28 will be conducted by an all-mail ballot.  In CD 25, Republicans have the chance to retake a district once held by Republican Steve Knight but most recently held by a Democrat.  Former Navy pilot Mike Garcia, endorsed by Governor Pete Wilson, is the likely Republican nominee in this district, which includes portions of Los Angeles and Ventura counties.  In Riverside County’s Senate District 28, GOP Assemblywoman Melissa Melendez seeks to succeed Republican State Senator Jeff Stone who was appointed Region Director for the U.S. Department of Labor.

While votes from California’s March 3rd primary are still being counted, Republican opportunities are becoming clear.

In Southern California’s 38th Assembly District, Republicans are running first and second in the open primary, assuring that the GOP will pick up an open seat previously held by a Democrat.  Former non-profit executive Suzette Martinez Valladares is currently in the lead with 31.8% and small business owner Lucie Volotzky is in second place with 17.7%.  Valladares was endorsed by both the Los Angeles and Ventura County Republican Parties.

Primary results show Republicans well positioned to retake at least 3 congressional seats currently held by Democrats.  In CD 21, including portions of Fresno, Kings, Tulare and Kern counties, Republicans have 52.4% of the vote according to the latest count. Former GOP Congressman David Valadao is currently leading with 50.1%.

In CD 39, which covers portions of LA, San Bernardino and Orange counties, former GOP Assemblywoman Young Kim is ahead of Democrat incumbent Gil Cisneros 48.4% to 46.8%.  The balance of the vote went to an NPP candidate who currently has 4.8%

In Orange County, Republicans currently have a combined total of 50.6% of the vote in CD 48.  GOP Supervisor Michelle Steel is in the top two along with Democrat incumbent Harley Rouda.

Two Republican incumbents failed to gain their party’s nomination and did not make the top two run-off.  In Assembly District 72, former GOP State Senator Janet Nguyen is currently the top vote getter with 33.8% of the vote. She will face Democrat Diedre Nguyen who narrowly defeated incumbent Assemblyman Tyler Diep for second place.  Diep was the sole Republican to vote for AB 5 which placed into law the restrictions on independent contractors imposed by the California Supreme Court and expanded the right of cities and local prosecutors to sue employers who violate the law.  Diep was the target of an independent expenditure campaign financed by members of the California business community.

In Assembly District 73, Laguna Niguel Mayor Laurie Davies is leading in the current returns.  Endorsed by the Orange County GOP, the Lincoln Club of Orange County and the Orange County Register, she will face Democrat Scott Rhinehart in the general election.  Incumbent Bill Brough, who faced a series of misconduct allegations, is currently running fourth.

BayAreaGOP.com acknowledges there is uncertainty regarding hosting in person events after April. We encourage organizations to consider hosting online events.