The CAGOP is depending on California Republican voters to be their eyes and ears during this election process. You can help protect the vote by visiting the CAGOP Voter Education page. If you see any evidence of voter fraud, file a Voter Fraud Incident Report.

Statement from the California Republican Party on Ballot Boxes 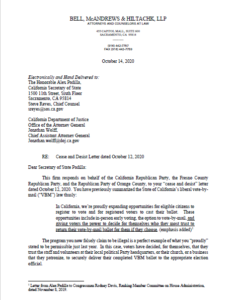 “In California, where you can have convicted felons and individuals with a criminal history go door to door and collect ballots from voters, Democrats are now upset because organizations, individuals and groups are offering an opportunity for their friends, family, and patrons to drop off their ballot with someone they know and trust. The Democrat anger is overblown when state law allows organizations, volunteers or campaign workers to collect completed ballots and drop them off at polling places or election offices.

“The Secretary of State’s actions is just a deflection from the mounting criticism for giving a non-budgeted, $35 million get-out-the-vote contract to a “Team Biden” PR firm, which is also receiving hundreds of thousands of dollars to oppose Republican candidates in targeted California districts.”  Hector Barajas, spokesman for the California Republican Party.

Reference: AB 306 by Asm. Lorena Gonzalez, a follow up to AB 1921 supported by the California Secretary of State, specifies that a ballot will not be disqualified solely because the person authorized to return it did not provide on the identification envelope his or her name, relationship to the voter, or signature. AB 1921 established that “any person” can return a Vote By Mail ballot, including a convicted felon or person with a criminal record.

On July 7, the Santa Clara County GOP and SD 13 nominee Alex Glew together asked the County Registrar of Voters to remove inactive voters in accordance with the settlement announced January 3, 2019 between Judicial Watch, the Election Integrity Project, Los Angeles County and the California Secretary of State.

In Los Angeles County, the settlement required the removal of inactive voters by February 2019.  However, Santa Clara County has determined that it must wait until after the November 2022 election to begin removing inactive voters.

According to the settlement in Los Angeles, the Secretary of State agreed to revise the NVRA manual to instruct counties to remove inactive voters in accordance with the National Voter Registration Act of 1993 (NVRA).  That law, as interpreted by the U.S. Supreme Court, requires that voters who have not voted in two federal elections be removed if they do not respond to a notice sent by the county.

In its August 8 letter to Dr. Glew, obtained directly from the registrar by BayAreaGOP.com, Santa Clara County Registrar of Voters Shannon Bushey said the California Secretary of State issued new instructions to counties in March 2019.   Then in December 2019, the county sent a notice to inactive voters that would trigger the process of removal if voters did not respond.

Because the county registrar determined that previous notices did not comply with the NVRA, Bushey said the county had to wait for two more federal elections before removing inactive voters who did not respond to the notice.

Glew, who co-chairs the Election Integrity working group for the Santa Clara County Republican Party, said that the county registrar’s response is currently being reviewed by Judicial Watch counsel for advice on next steps.

However, the correspondence demonstrates that diligence is required in order to insure that California counties are implementing the ballot integrity procedures as outlined in Judicial Watch settlement and the Secretary of State’s NVRA manual.  Currently Glew is working with the San Mateo County GOP to seek a similar response from the San Mateo County Registrar regarding the status of the process to remove inactive voters.

View the letter sent by Dr. Alex Glew, the response from Santa Clara County Registrar Shannon Bushey, and the settlement agreement signed by Los Angeles County and the California Secretary of State by clicking on the links below.