CRP Wants You to Be a Social Media Ambassador

The California Republican Party (CRP) knows we have an important message to share with voters. As Democrats focus on opposing the President and raising taxes, Republicans are offering a better way to govern, and you can be the messenger.

According to a 2016 study by the Pew Research Center, four in ten Americans get their news online, with personal contacts a common source of news that plays an important role. It was also found that adults commonly share news by word of mouth, making it important that they have good resources. Eight in ten Americans use Facebook, and half of the public turned to social media sites to learn about the 2016 Presidential Election.

Recognizing the widespread use of social media is just too big to ignore, the CRP has implemented a Social Media Ambassador program. After signing up, you will receive drafted tweets and Facebook posts one to two times per week that you can simply copy and paste into your social media platforms to help spread their message.

To participate, email communications@cagop.org. Share this program announcement with your Republican friends and organizations. If you have questions, contact Kaitlyn McGregor. 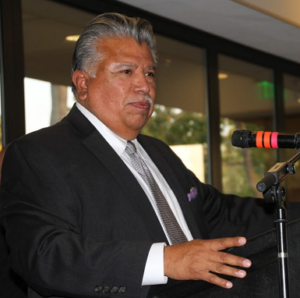 Santa Clara’s Bob Nuñez: Leading and Helping on Many Fronts

As he moves through a busy day of meetings, Bob Nuñez is the model of a multifaceted leader, serving in government, community, and party.  He serves as a city council member, on the boards of several non-profits, and as the chair of the Santa Clara County Republican Party.

Bob Nuñez was elected to the Milpitas City Council in November, coming in first out of six candidates. During the campaign, his priority issues were to increase public safety, promote economic development and managed growth, and strengthen the partnership between the school district and the city.

Nuñez was well informed on the latter issue because he had won election to the Milpitas Unified school board in 2014 and served until winning the council seat. He comments that while in education it may take years to see results, “in the City Council you can see a change almost immediately.” As an example, putting in a stop sign caused a dramatic reduction of accidents in one location.

He’s very proud of his work with the National Association for the Advancement of Colored People. He says that the relationship between the NAACP and the county Republican Party has improved over the years to where they see each other as partners. In fact, the county NAACP supported the legislative transparency initiative in the last election.

Bob also leads the work of the Nuñez Community Foundation, which provides assistance to foster children and scholarships for kids from alternative/continuation schools. The foundation supports programs in Santa Clara County and Southern California.

Bob Nuñez was elected Chair of the Santa Clara County Republican Party in 2015, after previously serving as Vice-Chair. He has continued to focus most Party effort on electing Republicans to local office.

There has been notable success in San Jose, where three Republicans are now serving on the city council. Nuñez is also proud to have reached outside the county to help Assembly Member Catharine Baker win her races.

He was also recently elected as Second Vice Chair of the California Republican County Chairmen’s Association.

He earned an AA degree in Data Processing from Fullerton Community College and his BA in Business Administration from CSU Fullerton. He later earned his MA in Public Administration at Cal State Long Beach and did doctoral study with United States International University in San Diego.

Bob Nuñez taught and served as Director of Personnel in Southern California. He worked twenty years in various positions at the Riverside County Office of Education. In 2004 he came to the East Side Union High School District in San Jose, the largest high school district in Northern California. He served as the District Superintendent from 2005-2009.

Bob lives with his wife Jil in Milpitas. Between the two of them they have six grown kids.

Bob says, “There’s probably not a week that goes by that I’m not asked about my political affiliation. I have always been a Republican and always plan to be. It’s harder here than in many areas to be Republican. But for me the Party has always been a party that reaches out to help people. I think that’s what our party is all about.”