Wednesday, October 18, 2017
Dear Republican Delegate/Friend,
I hope you can join me this weekend for the BayAreaGOP Reception at the California Republican Party Convention in Anaheim.  There will be lots going on, and you won’t want to miss it.
BayAreaGOP Convention Reception – Saturday Evening
Refreshments at 9 pm
Platinum 7 Ballroom at the Marriott
I invite you to join us after dinner Saturday night at the BayAreaGOP briefing, where you can catch up on the latest developments and socialize with fellow Bay Area delegates and activists.  We will discuss key issues coming up at the convention, committee results, and plans for the Sunday morning floor session.  “Tacos and S’Mores” plus beverages will be served starting at 9:00 pm.
Convention Program and Registration
The Convention hotel is the Anaheim Marriott, 700 W Convention Way, Anaheim.
You can see the program here.  You can register and purchase event tickets here.  There will be committee meetings, voter file labs, hospitality suites, vendors, and hundreds of great Republicans from around the state.
CRP Committees Will Consider Issues
At the convention the Rules, Resolutions, and Proxies and Credentials Committees will be meeting to consider rules changes, proposed resolutions, and proxy matters, respectively.  The committees will make recommendations for the delegates to act upon in the General Session on Sunday.  Meeting times are shown below.
The Rules Committee will consider eight proposals, including two that would allow the CAGOP to endorse statewide candidates and one to pay the State Chairman for his or her work.  The Resolutions Committee will consider a number of resolutions, including a Top Two Primary resolution.  More information about the Top Two Primary is available at www.letsbuildourparty.com.
Schedule
Key events and times of special interest for Bay Area attendees include:
Friday, October 20
Saturday, October 21
Sunday, October 22
Proxies
If you are a delegate and can not attend the General Session Sunday morning, please be sure to arrange a proxy.  You may get the form online here.  If you need assistance, you may contact us at convention@bayareagop.com.
I’ll see you in Anaheim.

“As former Republican state legislative leaders, we’ve each been responsible for electing Republicans. We know what it takes to win, and what’s at stake.

We’re writing to strongly recommend that Republican delegates reject the current efforts to repeal Proposition 14. Repealing Proposition 14 right now would rescue California Democrats from their brutal and costly infighting, and would almost certainly unleash a potentially devastating tsunami of money against our Republican candidates, a tsunami that might put us in super minority status indefinitely.

When your opponents are attacking each other, the best strategy is to get out of the way.

It’s difficult enough to win legislative seats when Democrats are currently outraising Republicans 3 to 1. You don’t have to fully support the top two primary to realize that now is no time to repeal Proposition 14 and give the Democrats a $197 million dollar gift – enough to spend $3 million targeting every single Republican legislator in the State Senate or State Assembly.

Our California Republican Party faces challenges, and the comeback won’t happen overnight. But needed reforms are taking hold and the party is headed in the right direction in the long term. Whether you support Proposition 14 or not, we should all agree that it’s a positive development that the Democrats are spending $197 million against their own candidates instead of against ours.

Let’s focus on rebuilding our party – not theirs. We urge you to join us in rejecting current efforts to repeal Proposition 14.” 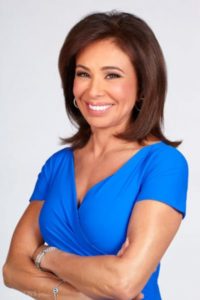 The California Republican Party Fall Convention will feature fiery Judge Jeanine Pirro at a Saturday afternoon session free to registered convention attendees.  The speakers lineup also includes House Majority Leader Kevin McCarthy, U.S. Senator Tom Cotton, Grover Norquist, and Stephen Moore of the Heritage Foundation.
Jeanine Pirro is the host of the Fox News Channel television program “Justice with Judge Jeanine”, which airs Saturday evenings at 9 pm.  She offers hard-hitting commentary in her “Opening Statement” and reviews legal issues in the week’s news.  She also serves as a legal analyst for Fox News and often covers trials and shootings.
During her legal career she was the first woman elected a judge of the Westchester County Court in New York.  Subsequently, she was elected the county’s first woman district attorney.  As district attorney, she created specialized units to prosecute domestic abuse, elder abuse, gang violence, and pedophiles on the Internet.
She was appointed by the governor to chair the New York State Commission on Domestic Violence Fatality Review Board.  In 2006 she was chosen to be the Republican candidate for state attorney general.  She has spoken throughout the country and authored three books.  You can watch Judge Jeanine’s informative review of Hillary Clinton’s new book here.
The Republican state Convention will be held October 20-22 at the Anaheim Marriott, with the theme “Electing Republicans in a Blue State”.  You can register online here.  Lots of activity is planned, and you can see the tentative convention program here. Business and voting will be conducted at the General Session Sunday morning.  Hotel reservations may be made here if the hotel is not yet full.
House Majority Leader Kevin McCarthy will speak at the Saturday lunch, no doubt with insights on both politics in Washington and reelecting our California Republicans to Congress.  Saturday afternoon your registration badge will admit you to a special General Session with speakers Judge Jeanine Pirro, tax fighter Grover Norquist, and the Heritage Foundation’s Stephen Moore.
At the Saturday dinner Senator Tom Cotton of Arkansas, an Army combat veteran and a member of the Senate Banking and Intelligence committees, will update us on efforts to restore liberty in Washington DC.
If you have any questions about the registration process, the CAGOP staff can help.  You can reach them by phone at 916-448-9496 or by email at convention@cagop.org.