Burt Lancaster serves as the President of the Republican Club at the Villages. He recently wrote, “I think we need to be alert to how our elected ‘politicians’ and other government employees are quietly and sometimes not so quietly encroaching on our freedoms to live. The ‘socialist’ agenda is being pushed upon all Americans and particularly Californians. You can see this in the spending habits, laws, and fake news articles meant to put fear in people’s hearts and minds.”

“But we the real people have a chance at changing this scenario. How you ask?”

“VOTE. VOTE, and tell your friends and neighbors the truth.”

If you are in the 27th Assembly District, be sure to write in Burt Lancaster in the open space below the other candidate’s name (see sample) and complete the arrow next to Burt’s name. 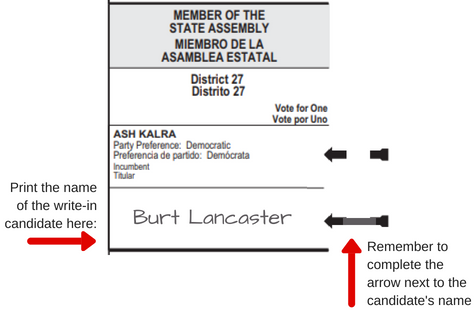