If the volume of Democrat outrage is the measure of Republican effectiveness, the CAGOP achieved a major step forward in its GOTV program by placing boxes to collect mail ballots in churches and gun stores.

Two years ago, Republicans were outgunned by Democrat ballot harvesting, made legal by the California legislature in 2016.  Democrats went further in 2018 by eliminating any requirement that the person collecting a voter’s ballot include their name and sign the outside of the envelope.

Republicans faced a choice: apply the rules as the Democrats had written them, or complain and lose at the ballot box.  The state party leadership chose to act and surprised Democrats who thought they had a monopoly on creative GOTV.

According to press reports, Republican Party ballot boxes have appeared in Orange, Los Angeles and Fresno counties where some of the most hotly contested races are going on.

The Democrat Secretary of State, who had previously proclaimed that “California was proudly expanding opportunities … for registered voters to cast their ballot” by “giving voters the power to decide for themselves who they most trust to return their vote-by-mail ballot,” suddenly decided to try to shut down GOP efforts to do just that.

Democrats have loudly questioned the legality of the CAGOP ballot collection but have yet to find a judge who agrees with them.  On Wednesday, a California judge rejected the Democrat effort to force Republicans to disclose the names of voters who dropped off the ballots at GOP placed ballot boxes.

Disclosing such names would have been a major violation of the voters’ rights according to CAGOP Communications Director Hector Barajas.

In addition, Republicans pointed out that an Orange County Democrat Congressman Harley Rouda has been encouraging his supporters to drop off their ballots at “neighborhood hubs” without complaints from Democrat officials.

It is ironic to hear Democrats now talking about preserving the “chain of custody” in the process of returning ballots, a position right out of the Election Integrity section of the California Republican Party Platform.  We couldn’t agree more.

You can read CAGOP statement on ballot boxes and their letter responding to the California Secretary of State on the Ballot Integrity page of this website.

California Voters Side with Republicans

While over 1 million ballots remain to be counted, the will of the California electorate is starting to become clear – and voters agree with Republicans a lot more than Democrats expected.

Much has been made of the Democratic dominance in California politics, but the current election results indicate that Republican ideas still hold sway with the California electorate.  The 2020 election highlights a path that Republicans can take to make their case to voters.

Elect Ritesh Tandon to Congress: A Voice of Sanity, Moderation, and Innovative Solutions 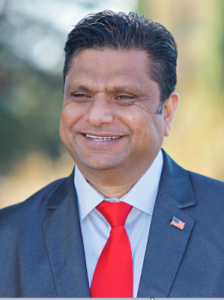 I am a candidate for Congress in Silicon Valley’s District 17. I want to be a voice of sanity, moderation, and innovative solutions in Congress. I believe in issue-based democracy, not ideology-based. I am pained by the divisive rhetoric of both sides of the political spectrum and will work on toning it down, such that we can all work towards “progress-oriented” solutions to our issues.

I came to Silicon Valley over 20 years ago to realize my dreams through higher education and participate in the amazing high-tech economy. I earned a Master’s in Computer Science and an MBA from Santa Clara University and started my Cisco career.

Since I arrived in the Valley, I have been volunteering my time and resources to help needy children and women in our diverse South Bay communities. I particularly focused on helping the Latino community on housing issues. Similarly, I have been helping people with eyesight issues in India through a well-known foundation.

I have a strong desire to expand my current humanitarian work for the community, and help constituents of the 17th Congressional District to improve their quality of life. Some of my immediate priorities for our constituents are:

I have a powerful vision for the next hundred years for Silicon Valley. I want to encourage both high-tech and biotech to grow tremendously with innovative tax policies and manufacturing incentives.

Following are my summary positions, and how they contrast with my opponent:

Proposition 16 is fundamentally unfair and against the basic American value of hard work and fair competition to move ahead in life.  Race-based allocations of educational opportunities, public jobs, and contracts will HURT our children’s future opportunities and jobs.

My opponent Ro Khanna supports Prop-16. He signed a pledge in 2014 to oppose a Prop16 type law (SCA5) but has flipped to support it now. Constituents feel betrayed by him.

My opponent has no proposals to help people with better wages, lower taxes, long-term job opportunities, or improve the economic health of the Valley.

On the other hand, my opponent, Ro Khanna, wants to defund Police, abolish ICE, and let criminal illegals stay in the US.

Medicare for All, promoted by Ro Khanna, is COSTLY and Reduces Quality. His argument that it can be paid by the operational savings (estimates of $40-60B per year) falls way short of the required expense of $2-3 Trillion per year. Tax increases for the middle class would become inevitable.

For more details on my policies, please visit my website: tandonforcongress.com.