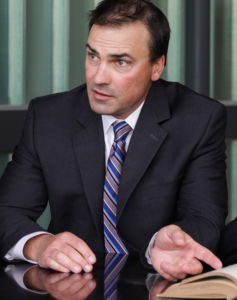 The DA office became vacant after previous District Attorney Mark Peterson was charged with misusing and misreporting campaign funds. At risk to his owner career, Paul Graves announced he would run for the position. Peterson eventually resigned and pleaded no contest as part of a plea deal.

Graves has supervised several prosecution units over the years, including general Felony, and currently Family Violence, which includes sexual assault and human trafficking.  Graves has prosecuted a broad range of offenses, everything from possession/sale of drugs and vehicle theft to gang-related crimes, sexual assaults, violent felonies, and homicides.  He has tried about 70 jury trials.

In his approach to the job, Paul Graves emphasizes victim-centered justice.  He stated that, “while all crimes, even misdemeanor crimes, can devastate lives, each presents an opportunity for a prosecutor to change and improve lives through victim advocacy.”  In addition to holding the defendant accountable, he works to obtain support services for the victim.

As district attorney, he would also focus on preventive approaches.  When he worked in the Juvenile unit, he tried to arrange sentences that would lead offenders to become productive members of society. The East Bay Times said that Paul Graves was the best pick to be interim DA.

Despite Graves’ wide support, the Board of Supervisors chose to appoint another candidate, Diana Becton, by a 3-2 vote, to be interim DA through 2018.  Becton is a judge whose progressive approach was heavily supported by liberal social justice groups.  Becton ran into her own integrity issues when it was revealed that she plagiarized parts of her application from Martin Luther King, Jr., and various other sources.

Paul Graves is running an agressive campaign in preparation for the June 2018 election. He has strong relationships with local law enforcement agencies and has endorsements from officers’ associations at over 20 agencies.

Born in South Bend, Indiana, Paul attended high school in Long Beach, California.  After receiving a baseball scholarship, he earned his bachelor’s degree at Loyola Marymount College.  Paul married his college sweetheart and went to law school at McGeorge School of Law at the University of the Pacific where he was elected to the Order of the Coif, the law school honor society.

Paul Graves lives in Contra Costa County with his wife and two children.  You can learn more about his campaign here. Supporters are invited to join Assemblywoman Catharine Baker and Supervisor Candace Andersen at his fundraiser on Nov. 3.

#GasTaxtrophe signs adorned convention walls highlighting the 12.5 cents per gallon gas and 20 cents per gallon diesel tax increases that kick in November 1st, courtesy of California Democrats in the legislature and governor’s office.  The California Republican Party has partnered with county parties around the state to highlight the Democrats’ insatiable appetite for tax increases with a series of events this Saturday, November 4.  Bay Area activities are included on the list of upcoming events on the Home page.

Delegates defeated by a 567-273 vote a resolution calling for repeal of California’s open primary. Debate on the floor highlighted the fact that the top two system is causing Democrats and public employee unions to waste millions of dollars fighting each other and that those same public employee unions would be the biggest beneficiary of top two repeal.

To help our statewide candidates reach the general election, delegates approved an endorsement process for statewide offices.  Endorsements for statewide office will be considered at the next CRP convention May 4-6 in San Diego, so Chairman Brulte asked delegates to be prepared to stay late on Sunday May 6 to complete the voting.  Make your flight reservations now to get the best air fares.

The California Republican Veterans Association requalified as CRP chartered organization due to the hard work of CRVA Chairman Chuck McDougald and CRP Veterans Committee Chair Kevin Krick.  Thanks to both for creating a voice for veterans inside our party and a vehicle to bring more veterans into our ranks.

After many years of informal discussion among delegates, the party voted to continue steps to professionalize its operations by making the Chairman a paid position. The rule change also created a compensation committee to help determine the appropriate compensation level.

We are grateful to the many Bay Area delegates who traveled to Orange County to participate in this important gathering of party leadership.