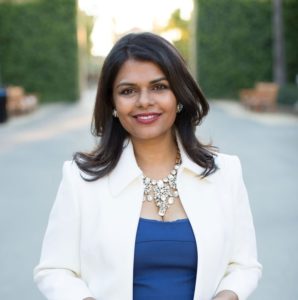 Respected Bay Area Stanford physician Dr. Vanila M. Singh recently returned from serving in Washington D.C. as the Chief Medical Officer at the US Department of Health and Human Services in the Office of the Assistant Secretary of Health. Dr. Singh’s work included serving as chairperson of the Opioid and Pain Task Force, which recently released its final report as an important part of the national opioid crisis response.
Recently, at a meeting of the South Peninsula Area Republican Coalition (SPARC), she described the process of leading the inter-agency task force that involved the US Department of Health and Human Services (including the CDC, FDA, and NIH), the Department of Defense, the Department of Veterans Affairs, as well as major patient advocacy groups, physician professional medical organizations, state medical boards, veteran service organizations, and key stakeholders to address the multifaceted and complex problem of pain care.  The US has an estimated 50 million persons who have chronic daily pain of 19.6 million have high impact pain.m. These conditions include dozens of underlying medical issues including common issues of surgical pain, muscle pain, inflammatory joint pain, back pain and migraines as well as less common neurological issues such as multiple sclerosis, lupus, diabetes, trigeminal neuralgia, complex regional pain syndrome and many other medical issues.

Congress passed the Comprehensive Addiction and Recovery Act of 2016 to, amongst other items, establish the Pain Management Best Practices Inter-Agency Task Force.  The job of the Task Force was to recommend best practices amongst federal agencies & key stakeholders to address acute and chronic pain- no small task given the many conditions that both categories affect.

The Trump administration appointed Dr. Vanila Singh MD MACM in early 2017 to the senior executive services level of the US government to serve as Chief Medical Officer.  Dr Singh is an anesthesiologist and pain medicine physician, and a clinical associate professor at Stanford University School of Medicine.  She was then named chairperson of the high profile Task Force in early 2018.  Later that year Dr Singh was also named Acting Regional Health administrator for Region 9, which included California, Arizona, Nevada, Hawaii, and the pacific islands.

Dr. Singh wrote:  “Transforming how we treat the various types of acute and chronic pain and recalibrating the role opioid medications play in pain care are a critical part of achieving the goals of reducing opioid harms and improving the quality of life for patients living with pain. … Rethinking pain treatment is a critical piece of the five-point Opioid Strategy HHS unveiled in April 2017.”

The Task Force had 29 members, representing federal agencies, non-federal organizations, and experts in pain, mental health, addiction, psychology, pharmacists, and patients.  They held 3 public meetings, received over 10,000 public comments, and identified gaps and inconsistencies and recommendations on that basis for best practices.  After dozens of subcommittee meetings, 3 public meetings, and following the FACA act of 1971, they produced a detailed report.  The initial draft report to Congress was supported, commended and lauded by over 150 key stakeholder organizations around the nation.

Dr. Singh wrote, “Our report emphasizes safe opioid stewardship, recommending approaches that mitigate unnecessary opioid exposure while also emphasizing various better and innovative treatment initiatives. The report also emphasizes that the current drug crisis is an illicit crisis consisting of fentanyl and other drugs of abuse that are coming from abroad.  In terms of addressing pain the report emphasizes a patient-centered multidisciplinary approach that may include 5 broad treatment categories that consist of 1. medications (non-opioid as well as opioid, depending on the individual patient’s situation) 2. interventional approaches 3. restorative therapies 4. behavioral health interventions and 5. complimentary and integrative modalities of treatment”

The report also emphasized “the need to address stigma, risk assessment, access to care and education” and “the need for individualized patient-centered care when diagnosing and treating acute and chronic pain. Each person has their own unique set of medical, genetic, environmental and sociocultural factors that affect their medical conditions and lives.”

Dr. Vanila Singh grew up in the Bay Area and earned her bachelor’s degree in cellular biology and economics at UC Berkeley.  She received her M.D. from George Washington University and did her residency in anesthesiology and pain management at Weill/Cornell in New York City.  She continues her work as a Clinical Associate Professor at the Stanford School of Medicine.  She has been very active serving on committees of associations in the medial field including anesthesiology, pain, public health.  Dr Singh has been invited extensively to speak on various topics particularly on the opioid crisis, pain and public health.  In 2014 she was a candidate for Congress in Silicon Valley’s District 17.  She and her husband have two children.

The Case for the California Republican Comeback

The pundits and power brokers who control Sacramento like to say that it’s not easy to be a California Republican. But I’ll let you in on a little secret:

It’s becoming a lot harder to be a California Democrat.

Governor Gavin Newsom and the Democrats control the process, so they deserve the “credit” for the outcomes. Look at what they claim as their “accomplishments.”

Areas of our largest cites have literally become cesspools, colonized by criminals, with rampant open drug use, horrific acts of violence, and human excrement scattered in the streets.

We have a massive housing affordability and supply crisis.  Yet all that the Democrats care about are putting up more roadblocks and regulations in the way of critical new construction.

Crime is on the rise, our communities are more vulnerable, and our first responders face life and death situations every day.  Yet Governor Newsom and the Democrats insist on returning more violent criminals to the streets, and protecting the sanctuary status of cities who refuse to enforce immigration laws.

Our schools have become political footballs where union leaders pour millions into the pockets of Democrat politicians, and then use those connections as a weapon to drive up spending and drive down accountability.

We have the second highest gas taxes in the nation.  Our marginal income tax rates and our combined state and local tax rates rank near the top, too.

And let’s not forget the billions they continue to waste on high-speed rail, the rampant dysfunction at the DMV, and the unanswered questions about where dozens of state agencies and offices spend your hard-earned money.

If you’re not convinced that the Democrats’ mismanagement in Sacramento will send voters our way, consider the Democrats running against President Trump and the absolute lunacy of their socialist agenda.

It doesn’t matter whether it’s former Vice President Joe Biden, Senator Kamala Harris, Senator Bernie Sanders, Senator Elizabeth Warren or some other wild-eyed, enraged liberal.  The policies they advocate would be an absolute disaster for California and America.

Their 70% top tax rate would crush California’s small businesses and job creators.  The “Green New Deal” would cost each California household an extra $6,000 per year and make China the dominant world economy.

They demand the enactment of a “Medicare for All” plan that would create a shortage of doctors, longer wait times for you to receive urgent medical care, and delays in the latest drugs for cancer and other serious illnesses.

How far have the Democrats lurched to the left?  In their debates, it seems like they spent more time attacking Barack Obama’s policies than they did President Trump.

I’m not saying that we’ll win every competitive race.  But I am saying that millions of Californians are realizing that the Democrats are leading us down a path from which we may never recover.

That’s why we’re hard at work in 482 towns and cities, across our Golden State’s 58 counties, recruiting a record number of neighborhood team leaders and volunteers.  They are the backbone of future Republican victories, and their vital work is funded by folks like you.

California is on the wrong track and everyone knows it.  We see it every day.  This our chance to make it better. To turn the corner.  And it all starts with you.

This is the moment we’ve been waiting for.  Both here in California and at the national level, the Democrats’ far left-wing policies are giving millions of our friends and neighbors a reason to consider our Party and our candidates. Please help us strike while the iron is hot.