Mike LeBarre: A Record of Service 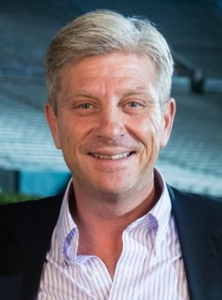 Ten years ago Mike LeBarre was yelling at the TV about how messed up the government was.  Today he serves as the mayor of his city, teaming up with city staff, council colleagues, community organizations, active citizens, and many others to improve his city.

He also chairs the Monterey-Salinas Transit Board, sits on the Monterey County Water Resource Agency Board, and serves on numerous local and regional boards and committees advocating for resources to benefit the city and region.

How did LeBarre’s transformation happen?

Mike LeBarre grew up in Woodland, a town in an agricultural area in the Central Valley northwest of Sacramento.  He studied at Sacramento City College, worked in construction, and played in a rock and roll band.

After a few chapters of life, he was looking for a new start and found King City, a small town where he could afford a house and that reminded him of his agricultural roots.  King City is located on the Salinas River and Highway 101 in southern Monterey County.

About ten years ago Mike would see news about what was going on with the federal government, get upset, and complain loudly.  Eventually a family member told him to do something about it or be quiet.  A political career was born.

In 2010 LeBarre ran for Congress as a write-in candidate and got 12 votes.  In 2012 he ran again and got over 5000 votes, but didn’t make it past the primary.  Some people would have stopped there.  But Mike learned and met people along the way.  One of these suggested that LeBarre should be on the city’s Parks and Recreation Commission, to which he was appointed.

In 2013 Mike LeBarre was elected to the local high school board.  The district was under state control due to past problems.  Mike and his board colleagues put in place a 17% budget reserve, increased graduation rates, lowered dropout rates, and earned back their local control.  In addition, LeBarre completed the Masters in Governance training program for board members offered by the California School Boards Association. The district now requires the program as a best practice for all board members.

In 2014 LeBarre was elected to the city council.  It was a challenging time, as one-third of the police department had been arrested in a car towing scandal earlier that year. In 2016 the council elected him mayor, and they reelected him two years later.  During this time the city rebuilt the police force, balanced the budget and put in a long-range budgeting tool to keep it balanced, developed a cannabis policy, brought an after school program to all the elementary schools and reduced shootings and homicides from a high of 32 shootings and three homicides in 2017, to zero since February 2018.  LeBarre credits the teamwork within the government and the community for being able to accomplish these projects.

Mike LeBarre says, “I believe everyone deserves a safe community where all are valued and respected. It is my goal to be an effective representative that solves problems and improves our quality of life.”

He also says, “I’m an individual, a father, and an American, and I’m a Republican because I care about all of those things.”

Mike LaBarre earns his living working in the fields for an agricultural lab, partnering with local farmers, ranchers, and vineyards to effectively manage their resources.

LeBarre has volunteered with several youth programs, including reading to elementary students, supporting the annual Farm Day for 3rd graders, mentoring Hartnell College students, and advocating for local youth soccer. He is a member of the Elks and the Chamber of Commerce and is a tribal member of the Comanche Indians. He says that his greatest joy is being a father.

Mike LeBarre may be contacted at mike.lebarre@att.net.

CA Judge Puts Trump Back on the Primary Ballot

California’s early primary, now set for March 3, 2020, has moved up the start of the Bay Area’s campaign season.  The opportunity to gather “in lieu signatures” for partisan races began on September 12, only a few days following the completion of the California Republican Party’s successful convention.  The filing process will continue through December 6 unless extended when an incumbent does not file.

Bay Area Republicans received good news when a U.S. District Court Judge suspended the legislature’s effort to deny President Trump a spot on the primary ballot, saying it would result in “irreparable harm without temporary relief” for Trump and other candidates.  Party leaders had publicly stated that failure to include Trump on the ballot could depress Republican turnout in the primary election.  The legal process will continue, but Republicans are optimistic that their efforts will prevail and Trump will be on the primary ballot.

San Francisco will hold its local election November 5, 2019 where Republican Ellen Zhou is running for Mayor along with five other candidates.  The highest profile issue on the ballot is Proposition C which would regulate the sale of e-cigarettes rather than ban them outright.  Bay Area residents will have the opportunity to see advertising both for and against this measure as both proponents and opponents appear to have purchased air-time on broadcast TV.

At its recent convention, The California Republican Party provided extensive training to help volunteers and candidates prepare for the 2020 elections.  Those opportunities will continue with training events throughout the state.  Please check our event listings on the BayAreaGOP.com home page for the upcoming training events in your region.