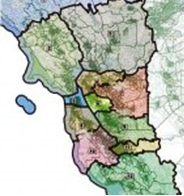 The California Citizens Redistricting Commission is preparing its first draft maps of new legislative and congressional districts for release on Friday, June 10.

The commission has completed a series of public input hearings around the state.  The current task is directing staff to actually draw the district maps.

A number of Republican activists and groups have participated in the hearings.  More than 15 Bay Area activists spoke at each of the Oakland and San Jose commission meetings.

David Salaverry and Raquel Vargas of the California Conservative Action Group have been working to achieve a fair redistricting.   They have coordinated efforts to prepare Bay Area activists to give testimony at the hearings.

In addition, the group has submitted a set of proposed Bay Area district maps to the commission, prepared by Chris Bowman and Allen Payton, with legal assistance from Larry Molton.  The maps can be seen, along with other valuable information, at the group’s website, www.fairthelines.org.

Videos of the commission meetings are available on the commission website.  There are also the handouts for the meetings, including maps proposed by interest groups or commission consultants Q2 Data.  The latter can change hour by hour as the commission gives instructions.

While the initial public comment deadline has passed, it will be important to continue to communicate to the commission in response to the draft maps.

SF Bay Area residents will have a chance to react to the first draft maps at a Redistricting Commission hearing in San Jose on Saturday, June 25.

Here is a summary of the planned schedule for Statewide Hearings:

Below is the one remaining Bay Area Commission hearing for public input.  Here is the opportunity to tell them what you think.

One can also submit comments to the commission by email to votersfirstact@crc.ca.gov or through other means on their Contact page.