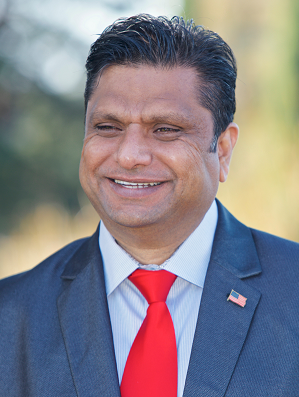 After two decades in Silicon Valley, engineer and businessman Ritesh Tandon is running for Congress in the South Bay.  He has built a successful career in technology at the same time that he has been a leader in helping others through his work with nonprofits.

Tandon says, “Over two decades ago, I immigrated to this country as a student searching for the American Dream. I found it here in the heart of our Bay Area, while studying for my MS and MBA at Santa Clara University. I believe this community is the greatest in our nation and it angers me to see the Washington D.C. elite ignore our values of strong family devotion and hard work. It will be my top priority to represent you, not entrenched party bosses.”

“As a former President of a non-profit, I see how many Bay Area families are struggling to make ends meet. As a father, I know the $23-trillion national debt is stealing our children’s future. As an independent small businessman, I understand the crushing burden of job-killing regulations.”

Professionally, Ritesh Tandon worked on unified communications products for Cisco, first in engineering, then technical marketing.  Then he managed strategic alliances for Jabra, which makes wireless headphones.  He and his wife founded their own startup, which will develop and market hardware devices.

At the same time Ritesh served as an executive committee member of the Sankara Eye Foundation, which has established 12 hospitals in India to eradicate curable blindness.  He raised millions of dollars for the hospitals and helped select the site for one of them. He also served as a volunteer and then president for five years of UPMA, an organization which supports childcare for poor kids in India. During his tenure, UPMA started funding Bay Area education and daycare programs for underprivileged Hispanic kids.

Ritesh Tandon is running in District 17, which includes Newark, Fremont, Milpitas, North San Jose, Santa Clara, Sunnyvale, and Cupertino (see the map).  He is challenging incumbent Ro Khanna, who, after seeking support from Republicans in a Democrat vs. Democrat election, now serves as a national co-chair of socialist Bernie Sanders’ presidential campaign.

The grandson of a freedom fighter for Indian independence, Ritesh Tandon grew up in northern India and earned a B.S. degree in engineering at L. D. College of Engineering, where he also captained the cricket team.  After coming to the United States, he earned an M.S. in computer engineering and an MBA at Santa Clara University, where he also met and married Zurica Dhar, a fellow computer engineer.  They have two children and live in San Jose.

You can hear Ritesh Tandon speak on Tuesday evening, January 28, at the East Valley Congress of Republicans meeting in Milpitas. (Check the event listings.)  You can find out more about Ritesh on his campaign website, tandonforcongress.com.

The Bay Area has taken one step closer to having an all-mail ballot election as three counties have now opted-in to the California Voters Choice Act.  For counties that adopt it, the Voters Choice Act eliminates neighborhood voting and instead provides three voting options:   (1) return ballots by mail, postmarked no later than Election Day, (2) place mail ballots in one of the drop boxes located throughout the county, or (3) vote in person at any regional vote center that will be open 11 consecutive days prior to Election Day.

Voters can visit a vote center up until Election Day to receive a duplicate ballot (as long as one has not been submitted) or to register to vote. While ID will not be required, signatures will be compared with those on file at your County Elections office or with the DMV.

San Mateo and Napa Counties opted-in to the Voters Choice Act in 2018 and Santa Clara County is joining them in 2020.  Passed by the California Legislature in 2016, the law requires that ballots be mailed to all registered voters one month before the election.  That means for the upcoming primary election, all voters in the these three counties would receive their ballots at the beginning of February.

Voters Choice changes the way that county Republican Parties must think about get-out-the-vote efforts, since all voters have the opportunity to vote earlier in the process.  Because all Republicans will now have a physical ballot, county parties can develop a strategy to assist Republicans in dropping off their ballots – a process the Democrats pioneered under the mantle of “ballot harvesting.” Unfortunately, Republicans must now adapt to this new practice in order to remain competitive in the escalating battle of campaign strategy and tactics.

The good news is that Republicans have many opportunities to volunteer to assist candidates for local, state and federal office. Check out the list of BayAreaGOP.com’s featured Republican candidates and the California Secretary of States’s certified list of candidates on the Voter Guide page.