In June, members of the CAGOP Platform Committee elected 54 of their members to serve on the Platform Drafting Committee. The drafting committee will be chaired by Northern Regional Vice President Deborah Wilder and will meet on July 27 in Los Angeles.

At that meeting, the drafting committee will consider adopting an initial draft platform from among the numerous proposals submitted by CAGOP delegates. Then they will consider amendments to that draft. In total there are 40 platform proposals and amendments listed on the Delegates Only website of the California Republican Party.

The draft platform recommended by the drafting committee will be considered by the full platform committee and then all CAGOP delegates at the September convention in Indian Wells.

You can see a list of the Bay Area members of both the Platform and Drafting Committees on the Platform Committee page. You will also find a link to the convention registration form on the Convention page. We look forward to seeing you in Indian Wells. 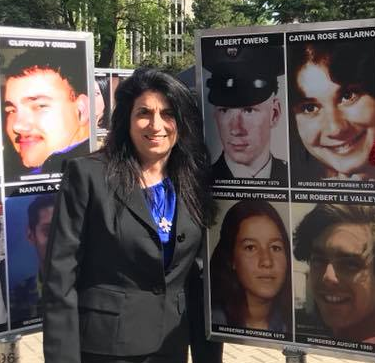 Nina Salarno Besselman visited the Bay Area recently and gave a powerful explanation of the importance of supporting the upcoming Keep California Safe Initiative.  The initiative measure will stop early release of violent criminals, reform theft laws, and expand DNA collection from convicts.  It will be on the statewide ballot in November of 2020.
Assembly Bill 109, the “realignment” bill which was enacted in 2011, and Propositions 47 and 57, which were passed in 2014 and 2016, all released “non-violent” prisoners from state prison or reduced their sentences.  While some of these changes may be appropriate, Besselman believes that they went too far.  Two examples cited in the campaign to qualify the Initiative are assault with a deadly weapon and domestic violence.
Proposition 47 classified some “non-serious, nonviolent crimes” as misdemeanors rather than felonies and allowed early release, which helped reduce the state prison population.  However, some crimes, such as sex trafficking of children, rape of an unconscious person, felony assault with a deadly weapon, and battery on a police officer were considered nonviolent.  The Keep Cal Safe (KCS) initiative will prohibit early release for these crimes.
Proposition 47 also increased the limit for theft and shoplifting to $950 before being considered a felony.  An Independent Institute report says that, “One of the most notable changes ushered in by Prop 47 was a sudden increase in the rate of motor vehicle break-in thefts. Informally known as “smash-and-grab” burglaries, these offenses became especially more likely in densely populated cities throughout the state.”  The KCS initiative will add a new felony for Serial Theft, when a person is caught for the third time stealing with a value of $250.
KCS also reinstates DNA collection for certain crimes.  Besselman pointed out that the Golden State Killer cold case was finally solved with DNA evidence.  She says that more crimes can be solved with more DNA information in the database, and persons convicted of minor crimes are sometimes also guilty of a major crime.
There is a large coalition supporting the KCS initiative, including the California District Attorneys Association, the California Peace Officers’ Association, and the California Police Chiefs Association.
There’s a reason Nina Salarno Besselman is intense in her drive for justice.  Her involvement with criminal justice began when she was eleven years old, and her older sister Catina Rose was murdered execution style on her first day of college.  After Nina’s family learned that crime victims had few rights, her mother Harriet Salerno co-founded Crime Victims United, a victims advocacy organization.  Nina became a lawyer and a prosecutor and today serves as president of Crime Victims United.
You can learn more about the Keep California Safe initiative and donate to it at their website, keepcalsafe.org.
MENU