Below is a listing of the Bay Area Republican Nominees and Endorsed Candidates in the June Primary. Learn more about the write-in candidates in the feature article on this site.

Not sure about your districts, or want to see endorsements published by the California Republican Party? Visit this webpage: cagop.yourvoter.guide.

Four Republican Write-In Candidates Step Up: Please Write Yours In

Jean Solnordal and Justin Aguilera Run for Congress
G. Burt Lancaster and Joseph Grcar Run for Assembly
After no one filed to oppose four incumbent Democrats, write-in candidates have jumped in to oppose them and offer voters a sensible alternative.  They are Jean Solnordal (CD13 Barbara Lee), Justin Aguilera (CD19 Zoe Lofgren), G.Burt Lancaster (AD27 Ash Kalra), and Joseph Grcar (AD20 Bill Quirk).  If voters write them in, and they come in in the top two, they’ll be on the November ballot as the Republican nominees.  So please write them in if you vote in any of these districts.
Be sure to follow the County’s instructions by writing in the name and completing the arrow to the right. See example below: 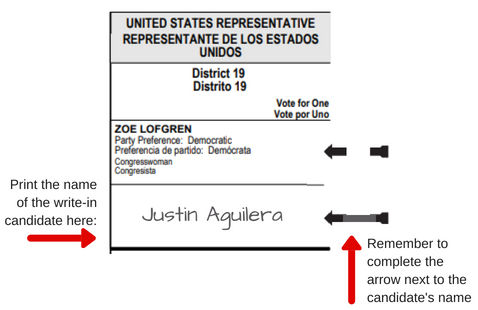 Jeanne Solnordal is running in Congressional District 13, in the Berkeley-Oakland-San Leandro area.  She believes it is important for the Republican Party to be represented on the ballot.  She strongly opposes the sanctuary state law and is working
to encourage cities to opt out.  She is a strong believer in freedom of speech and wants to support groups on campus whose freedom of speech has been suppressed.
Jeanne grew up in New Hampshire and takes seriously the state motto, “Live Free or Die”.  She came to California after she joined the Air Force and was assigned to Travis Air Force Base.  She worked her way up at the IRS for 18 years, becoming a manager teaching tax law.  At the same time she earned her BA degree in tax accounting at Golden Gate University and a law degree at JFK University.  Subsequently, she became a real estate broker and now runs a successful real estate company with her husband.  She’s also raised five successful children.  You can contact Jeanne Solnordal at her campaign email address: jeannesolnordal@yahoo.com.

Justin Aguilera is running in Congressional District 19, which runs from central San Jose down Highway 101 to Gilroy. (district map)  He was featured in the May issue of the BayAreaGOP Newsletter.
Justin has an entrepreneurial spirit.  He has been working in Silicon Valley as Director of Business Development and Marketing for a bail bonds company, as well as similar work for Global Supply Industries Inc.
Dedicated to community service, Justin has worked with various charities, including tutoring and passing out goods at Sacred Heart in San Jose, preparing food at Dorothy’s Kitchen, and volunteering at STAR Riders in Marina, where they provide horseback riding to disabled children.
Having spoken to many young people, Justin is aware of the many issues that affect the children of Santa Clara County.  They grow up in an age of ever advancing technology, with a staggering amount of student loans, and difficulties in finding affordable housing.
Congressional District 19 runs from central San Jose down Highway 101 to Gilroy.  (See the map.)  A voter from the district need only write the name “Justin Aguilera” on the appropriate place on the ballot, for either a mail-in ballot or at the polling place.
Read more here.
Justin’s campaign webpage is www.JustinAguilera.com.

G. Burt Lancaster is running in Assembly District 27, which includes the eastern and southeastern parts of San Jose plus the downtown area.  He says, “I will work on cutting frivolous spending that plagues our state government”.  He has had a long and successful career involving engineering, entrepreneurship, and consulting.
Burt was born in San Francisco to a poor family and grew up in the East Palo Alto area.  Out of necessity, he began earning money at age 11.  He washed dishes and did odd jobs and was able to join the Sea Scouts.  He earned his college degree at the California Maritime Academy with an emphasis in engineering.
After working as an engineer at Lytton Industries, Burt served in the Navy, aboard the USS Maury in the Pacific.  At age 21 he was the youngest chief engineer of a deep draft vessel in the Navy.  After his service, he returned to Silicon Valley and joined Air Products and became an expert in manufacturing high tech devices.  He started his own consulting business, turned around two companies, and started others.
Today, Burt continues to help many people and companies become successful and has clients around the world.  His community activities include running a senior program in Cupertino for over 25 years.  He and his wife Diane have two adopted Korean children and one grandchild. You can contact G. Burt Lancaster’s campaign at his email address.

Joseph Grcar (pronounced Ger-cher) is running in Assembly District 20, which runs from Hayward to northern Fremont.  He says that when the current assemblyman was a city council member in Hayward, he trashed the shoreline by building an ugly power plant to provide power – to San Francisco!  Grcar opposes Regional Measure 3, both for local reasons (East Bay commuters pay heavily but don’t receive many benefits) and general reasons (tolls never sunset and rise automatically; projects are vague and benefits doubtful).
Grcar was born in Minnesota.  He and his wife earned their doctorates in the Mid-West, then moved to California.  He says he “was a scientist at the government laboratories in both Livermore and in Berkeley, where I acquired some amazing stories and a healthy skepticism for the wisdom of trying to solve problems by throwing money at them.”  You can learn more about Joseph Grcar on his campaign website, joegrcar.com.
MENU