In 2019, delegates to the California Republican Party convention will consider the adoption of a new party platform.  That process begins with the election of 80 platform committee members, one from each of California’s 80 assembly districts, by the CRP delegates from each district.

The full platform committee of over 200 members includes those members elected by Assembly district, every GOP officeholder and nominee for California State Assembly and State Senate, and most of the elected CAGOP leadership.

The voting for the last 80 platform committee members was completed on April 26 and ballots will be counted on May 7 at CRP headquarters in Sacramento.

The platform recommended by the drafting committee will be considered, along with proposed amendments, by the full platform committee and ultimately by all delegates at the September CRP Convention in Indian Wells.

You can find the list of current Bay Area platform committee members as well as a timeline for the process for adopting a new platform on the CAGOP page.  You can read the current platform posted on the CAGOP website. 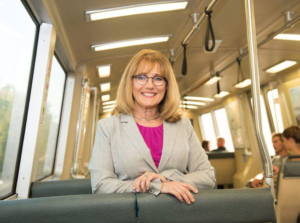 Since Debora Allen was elected to the BART Board of Directors in 2016, she has been pushing hard to improve the system.  She works to improve accountability, rider experience, and infrastructure while being fiscally responsible.

It’s not easy.  The Bay Area Rapid Transit system is a very large, slow moving and bureaucratic system.  Many other BART board members have liberal viewpoints and different priorities.  In addition, urban board members (the majority) are more interested in building transit village housing on BART property, while suburban members are more concerned about providing parking for riders.

Debora Allen recognizes that though she can’t implement changes by herself, she can change the narrative.  She can give voice to many rider concerns.  She has written many opinion pieces for newspapers, given interviews, and called for accountability at board meetings.  She writes informative Facebook and Twitter posts, some of which are amusing – in a disturbing way.

For example, in a Facebook post, she refers to the supposed “BART Department of Free Rides” and observes, “In a long meeting on Fare Evasion, Flash Mob Train Robbers, and transit in the dark, some of my fellow board members offered comments like ‘I am offended’ and ‘Public transit is a human right’. My neck hurts from so much SMH.”  (shaking my head)

Allen is having some success.  BART is finally making some efforts to crack down on fare evaders and looking for additional ways to do it.  They are more than doubling the number of fare inspectors.  (See her article.)  In December BART approved a salary increase for BART police officers, which should help their understaffed department hire more officers and better deal with BART’s troubling crime issues.

A previous Chief Financial Officer and business owner, Allen believes she has also had some positive influence on the BART financial system, though she considers her advice to staff confidential.  She discussed various BART issues in an interesting interview with Contra Costa Today.

During her previous 25 year career, Debora worked as a corporate Chief Financial Officer, Chief Executive Officer, and Controller, as well as being the owner or co-owner of several businesses.  She also consulted with businesses and non-profit organizations.

Debora Allen represents District 1 on the nine member BART board.  The district includes the center of Contra Costa County, near Highway 680, and runs from Martinez to San Ramon.  She will run for reelection in 2020.

Debora and her husband, Timothy Allen, have lived in Contra Costa County since 1987.  They have two adult sons and two Great Pyrenees dogs.  They spend much of their free time hiking, biking, fishing, gardening and enjoying the beautiful environment which they call home near Mount Diablo.